Return to vampire hunter Anita Blake’s thrilling world in the next novel by the New York Times bestselling author of Crimson Death.

Anita Blake faces new, even deadlier enemies as she and the people she loves confront major changes in their lives, in the latest thrilling adventure featuring the fan favorite vampire hunter.

Vampire hunter Anita Blake has managed to overcome anything that faces her. But this time, there’s a monster that even she doesn’t know how to fight...

A remote Florida Island is a perfect wedding destination for fellow US marshal and best friend Edward’s upcoming nuptials. For Anita, the vacation is a much welcomed break as it’s the first trip she gets to take with just wereleopards Micah and Nathaniel. But it’s not all fun and games and bachelor parties…

In that tropical paradise, Micah has discovered a horrific new form of lycanthropy, one that has afflicted a single family for generations. Believed to be the result of an ancient Greek curse, it turns human bodies into a mass of snakes.

When long-simmering resentment leads to a big blow-out within the wedding party, the last thing Anita needs is more drama. But it finds her anyway when women start disappearing from the hotel and worse--her own friends and lovers are considered the prime suspects. There’s a strange power afoot that Anita has never confronted before, a force that’s rendering those around her helpless in its thrall. Unable to face it on her own, Anita is willing to accept help from even the deadliest places—help that she will most certainly regret—if she survives at all, that is...

Anita is in a bridal shop in New Mexico to get fitted for her dress for Donna Parnell and Edward's wedding. Over the phone, Micah Callahan tells Anita about the strange hereditary snake lycanthropy he's working with in Florida.[3] Donna's bridesmaid Dixie starts a fight about Anita allegedly having an affair with Edward, but Donna handles it.[4] Anita speaks with Nathaniel and Nicky about the wedding situation.[5] Anita gets her dress fitted, Edward shows up, and Dixie calls him a cheating bastard and walks out.[6] They discuss kicking Dixie out of the wedding, but Donna doesn't want to, and Anita and her party need to leave.[7]

Back in St. Louis at the Circus of the Damned, Anita thinks to ask Melanie about the snake lycanthropy.[8] Nathaniel and Anita find Micah and Jean-Claude sharing a bath and join them.[9] Anita starts talking Coalition business with Micah, which upsets Nathaniel and Jean-Claude.[10] Anita and Micah "divide and conquer," with Micah staying with Nathaniel in the bath and Anita taking Jean-Claude to the bedroom. During sex, Anita drops her shields with Jean-Claude and lets him into her mind.[11] Jean-Claude leaves for his meeting,[12] and the other three leave to talk to Melanie.

Rodina and Ru join them as bodyguards. Anita's inner lioness acts up and they discuss the recent power boost.[13] They go into the Circus and speak with Melanie, who tells them she doesn't know anything about the snake lycanthropy.[14] They go back underground where Claudia tells Anita about the new problem with too many new guards, and she and Peppy admit that Jean-Claude is having an effect on them.[15]

Anita, Nathaniel, and Micah fly out for the wedding with Rodina, Ru, Bram, and Nicky as their guards.[16] Bernardo Spotted Horse meets them at the airport, and Rodina and Ru try out their personas on him.[17] Anita speaks to Rodina and Ru about it out in the parking lot, and they prefer to stay undercover.[18] Bernardo drives them to the boat, and Ru suggests joining the poly group, but Anita gets defensive. Rodina continues to push and tells Anita that she wants to hate Anita for Rodrigo's death but cannot.[19]

Micah receives a phone call and needs to go help one of the local snake lycanthropes, which upsets Nathaniel because they're supposed to be on vacation. Nathaniel, Ru, and Rodina go on to the hotel, while Anita, Micah, Bram, Nicky, and Bernardo leave to help.[20] They get Andy into the car when he transforms, but Anita knocks him out and they get to the boat.[21]

Nathaniel texts and they can tell he's upset.[22] They go to meet him at the hotel pool, where they find Edward and them having a swim race with another wedding party. Nathaniel and Ru have been flirting with various women, and Anita has a reaction to Ru.[23] Anita heads to her hotel room when Donna catches her and pulls her away to talk. Ted/Edward had been married before and Donna didn't know, but Anita is able to reassure her. Edward shows up and they make up.[24] Anita leaves but runs into the bridesmaids and learns that Dixie wants to tell Donna's kids, Becca and Peter, about the supposed affair.[25] Anita goes to the pool and tells Bernardo what's going on.[26] On the way back, she runs into Peter, and Rodina flirts with him but Peter gets upset.[27] Anita finally makes it to the hotel room, tells Nathaniel and Micah what's happened. They discuss their relationship, make up, and have sex.[28]

The next morning, a police officer questions them about the disappearance of one of the women who was flirting with Nathaniel.[29] Donna is upset about the investigation and it leads to a fight with Edward.[30] Peter carries Dixie in to stop her from telling Becca about the supposed affair, and he's injured from her stabbing him with a pen.[31] Peter is taken to the hospital and the police ask more questions, and Anita meets Detective Terry Rankin.[32] Anita takes Becca to her hotel room to change and runs into Olaf.[33] Anita and Olaf talk while Becca changes.[34] Anita checks on Becca and calls her people to let them know Olaf is in town.[35] Bernardo reassures Becca that Peter is all right but he's in surgery, and Anita works out that Peter is healing faster than normal because he was exposed to two types of lycanthropy at once.[36] Anita, Becca, and Olaf head out and run into Edward's friend Rufous and Nicky, who talk to Olaf and take Becca while Anita leaves to find why Nathaniel is still being questioned.[37]

Micah and Nathaniel are unable to leave the interrogation until Anita opens her metaphysical links and Micah is able to pull Nathaniel out. They were being kept there by Detective Rankin's power.[38] They regroup in the hallway when Edward calls, and Anita tells him that Becca heard Dixie.[39] They head to the hospital to check on Peter and realize no one's seen Denny since the day before.[40]

Edward and the others return to the hotel and Rankin confronts them outside in front of press.[41] Rankin nearly rolls Anita, but Jean-Claude helps protect her.[42] Officer Angela Dalton, a psychic, accuses them of using powers on Rankin, but Anita and her people are able to help her break free of Rankin's influence.[43] Captain Tyburn pulls Rankin aside along with Edward, Anita, and Olaf, and it's indicated that Rankin has some personal connection with Nathaniel which is why he's targeting him. Olaf accuses him of pedophilia,[44] which starts a fight that Olaf finishes.[45] Captain Tyburn has an officer take Anita, Edward, Olaf, and Bernardo to the crime scene while he speaks with Officer Dalton.[46] They look at Bettina Gonzales's body but all they can determine is that a human didn't kill her and they don't know what did.[47] Bernardo, who is affected by Bettina's death, picks a fight with Olaf because he isn't bothered by it.[48]

Captain Tyburn joins them and he agrees to Anita's suggestion to use a shapeshifter to try to find Denny.[49] Tyburn offers them a ride but there aren't enough seats in the car, so Olaf argues and gets Anita to sit on his lap for the ride.[50] Tyburn and Dalton discuss Rankin's abuse of power with them. The car spinning out leads Anita to sitting in Bernardo's lap for the rest of the drive. Tyburn tells them of a similar murder that happened twenty years earlier, and they realize that someone overheard a conversation between Bernardo and Denny in the hotel the day before, which narrows the suspects.[51] Back at the hotel, Anita talks to her people and they agree Nathaniel should be the one to shapeshift for the investigation.[52] Nathaniel shifts while recorded for the police records.[53] They go looking for Denny and Nathaniel leads them to the trunk of a car where they find Denny alive.[54]

Two more women have gone missing. Anita calls Micah and learns that Christy, Andy's wife, had her baby and it has a snake lock.[55] Anita and her team go to question witnesses where the two women went missing, which is the same bar/restaurant where they picked up Andy the day before.[56] They question Cleo Stavros, who is part of the snake lycanthropy family, but she claims she doesn't know anything.[57] They lie and threaten Cleo during the questioning, and Olaf attacks her, causing one of her snake locks to lash out in return. Anita and Olaf play a little roleplay and scare Cleo enough to admit her "Uncle Terry" took the two women.[58]

They head to Terry Rankin's place where they find Rankin with one of the abducted women. Rankin talks to Anita and Tyburn and tells them that members of his family killed Bettina thinking they could end the curse on his family. He tells them that he recognized Nathaniel from his child porn videos. Rankin then commits suicide by aiming his gun at Anita, forcing her to shoot and kill him.[59] Bernardo, Olaf, and Edward have found the other abducted woman and are running from a massive snake creature, and Anita sees Andy Stavros's head among the snakes. They fire at it and Edward uses a flamethrower, and other police join them, eventually killing it.[60]

In the Epilogue, Edward and Donna do get married after a delay long enough for Peter and Denny to be there. Melanie sees the videos of Christy's child online and thinks they might be her descendants, so she agrees to try to help them.

Serpentine begins on a Saturday and spans about a week. It takes place a few months after the previous novel Crimson Death.

The other wedding party: 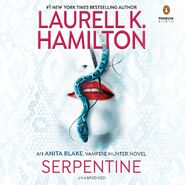