Guilty Pleasures is a horror and mystery novel by Laurell K. Hamilton, and it is the first novel in the Anita Blake, Vampire Hunter series.

It introduces the character of Anita Blake, Vampire Hunter and Animator as well as her world. An alternate history where magic, vampires, shapeshifters and many other supernatural elements are known to exist. Anita Blake, a zombie animator (who works for Animators, Inc.) and licensed vampire executioner, is forced to investigate a series of vampire murders, and in the process comes into contact with many of the supernatural characters of her home city of Saint Louis, Missouri. The novel blends elements of supernatural and hard boiled detective fiction.

Years after the publication of this novel, the series got a prequel in comic book format: The First Death. Some events that are already referred to in this novel get presented there in more detail.

Guilty Pleasures is set in July,[2][3] and covers a time period from a Thursday to the following Tuesday. The last chapter refers briefly to events further ahead, but doesn't specify how far or near they are.

Ever since the Supreme Court granted the undead equal rights, most people think vampires are just ordinary folks with fangs. I know better. I’ve seen their victims. I carry the scars…

“In a world where vampires, zombies and werewolves have been declared legal citizens of the United States, Anita Blake is an “animator” – a profession that involves raising the dead for mourning relatives. But Anita is also known as a fearsome hunter of criminal vampires, and she’s often employed to investigate cases that are far too much for conventional police. But as Anita gains the attention of the vampire masters of her hometown of St Louis, she also risks revealing an intriguing secret about herself – the source of her unusual strength and power.”

As an animator and licensed vampire hunter, Anita Blake raises zombies for a living, consults with RPIT on supernatural crime along with killing vampires in her spare time as a vampire executioner.  One of the top vampire hunters in the country, Anita has earned the nickname "The Executioner."  She's the vampire's version of the bogeyman.  So when Willie McCoy, a vampire, wants to hire her to investigate a rash of vampire murders, Anita is suspicious.  She refuses the offer, but Willie assures her that his employers will not accept her answer.

Anita learns how persistent the vampires intend to be when she attends her friend Catherine's bachelorette party, held at Guilty Pleasures, a strip club run by Jean-Claude, one of the city's most powerful vampires.  Shortly after a stripper named Phillip takes the stage, Anita is called away to consult with the police on another case.  By the time she returns to the club, Catherine has been mesmerized by Aubrey, a vampire working on stage.  To protect Catherine, Anita agrees to meet with Nikolaos, master vampire of St. Louis.  When Aubrey attacks Anita, Jean-Claude saves her by establishing a metaphysical bond, called a "mark," that allows him to give Anita some of his power.

While unconscious, Anita is taken to the master vampire's daytime resting place beneath Circus of the Damned, an indoor amusement park.  Nikolaos summons some of the local wererats to intimidate Anita.  However, Rafael, the Rat King, intervenes and thwarts Nikolaos's plan.  Eventually, Anita meets with Nikolaos and another animator named Zachary.  Nikolaos has employed Zachary to raise a witness to one of the murders as a zombie.  When she learns of Rafael's interference, Nikolaos tries to use her supernatural power to force Anita to agree to her demands.  When she is able to withstand the onslaught, Nikolaos realizes Jean-Claude has given Anita his mark.

Zachary seems familiar to Anita, but she's too busy staying alive to remember why.  Eventually, Zachary begins questioning the zombie about the murders, but shatters what is left of its mind when he attempts to use violence to force answers from it.  When the interrogation fails, Nikolaos flies into a rage.  Jean-Claude steps in to protect Anita and the resulting battle ends with Jean-Claude being imprisoned without access to blood.  Desperate to save himself, Jean-Claude forces another mark on Anita while she is running for her life.

Anita returns home to find Edward, a hit man who specializes in vampires and lycanthropes, waiting in her apartment.  He demands the location of Nikolaos’s daytime lair and offers to help Anita kill the vampires in exchange for information.  Anita bargains for time and Edward leaves with a promise to bring her more weapons.  Anita dreads his return because she knows he will torture her if she refuses to reveal the location.

Surrounded by monsters, Anita hunts for clues.  Throughout the investigation, she must contend with strange food cravings and stranger dreams as Jean-Claude siphons energy from her to keep himself alive.  Nikolaos sends Phillip, the stripper from Guilty Pleasures, to help Anita and to report her progress.

Following leads, Anita goes undercover at a freak party for vampire junkies like Phillip.  While she's there, she stumbles across Zachary trying to raise a zombie for Nikolaos and a group of vampires.  Together, she and Zachary raise the zombie and Anita notices a magical charm tied around his arm.  When she tries to touch it with a bloody hand, Zachary reacts with fear.  Anita realizes she attended Zachary's funeral and the charm keeps him alive.  Anita returns to the party but she and Phillip must flee when it's disrupted by religious zealots.

The raid on the party makes Anita suspect The Church of Eternal Life, which promises its followers immortality by making them vampires, may be involved in the murders.  Anita questions Malcolm, master vampire and leader of the church, and is convinced he hired Edward to kill the murdered vampires.  Anita must decide whether she is capable of sacrificing a fellow human to a monster like Nikolaos, even to save her own life.

Before she can reach a conclusion, Anita learns Phillip has been snatched by vampires and is being tortured.  She attempts a rescue, but Nikolaos has Phillip killed.  In retaliation, Anita stabs one of the vampires who helped with the torture.  Nikolaos bites Anita to punish her defiance.  While Anita is unconscious, Nikolaos dumps her at Guilty Pleasures.

When she wakes, Anita returns home to find Edward, who has come to get the location of Nikolaos’s daytime resting place.  Anita agrees to tell him in exchange for his help cleansing her wounds and killing Nikolaos.  Anita wants to sneak into the Circus undetected, so she arranges a meeting with Rafael to ask for help.

Before her meeting with Rafael, Anita's boss calls to tell her a high profile client needs her help laying a zombie to rest.  Anita and Edward go to the cemetery but the client never arrives.  Instead, they are confronted by Zachary and a pack of ghouls.  Zachary confesses to murdering vampires in order to fuel the magic of his charm.  He orders the ghouls to devour Anita and Edward but they manage to evade the flesh-eating zombies.  Later, they secure the aid of the wererats.

The wererats lead Anita and Edward to an entrance beneath the Circus.  Once inside, Anita and Edward kill two vampires by injecting them with silver nitrate and another with a shotgun.  The noise attracts Nikolaos and her human servant.  Zachary is with them and has raised Phillip as a zombie.  When Nikolaos forces Anita to fight her human servant, Anita declares she knows the identity of the murderer.  Zachary tries to kill Anita again, but Nikolaos wounds him.

Together, Anita and Edward execute Nikolaos and her human servant, destroy Zachary's charm, and rescue Jean-Claude, who takes Nikolaos's place as Master of the City.  Anita uses her magic to lay Phillip to rest.  The novel ends with Edward and Anita being treated by a were-rat doctor and Jean-Claude asking Anita on a date.

The novel was adapted into a comic book series of the same name in 2006.

Guilty Pleasures was first published in October 1993 by Ace Books. It has had multiple reprints and editions.[9] 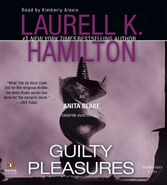