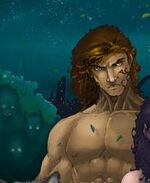 Richard Zeeman is tall, handsome, and athletic. He teaches science at a junior high school, is kind and helpful to people and animals alike, and loves outdoor activities such as hiking. In other words he is the world's biggest Boy Scout, as Anita Blake likes to call him. The only things missing from his life are a lovely wife and the whole nine yards, complete with a picket fence, and what woman or a mother-in-law wouldn't wish for such specimen as a groom? He even has a nice family full of nice people just like him.

Unfortunately, that's not everything Richard is. Due to sheer bad luck he has found himself smack in the middle of preternatural politics and power struggles, and he does not want to be there. He likes his new friends just fine and is willing to go to great lengths to protect them, but he hates what he has become, and hates the archaic and violent customs that surround his new existence. He believes in democracy and good will among people, and chafes against any hierarchy that places the strong high above the weak. And most of all he hates the new urges for violence he has discovered in himself.

He is strong-willed. He is powerful. He is righteous and persistent. He could go far, if he could just get over himself...


Thank you for voting, and be sure to check back for our next poll!

Retrieved from "https://anitablake.fandom.com/wiki/Anita_Blake_Wiki?oldid=10095"
Community content is available under CC-BY-SA unless otherwise noted.