Anita Blake Wiki
Register
Don't have an account?
Sign In
Advertisement
in: Articles to be expanded, Novels, Anita Blake Series

Affliction is book number twenty two in the Anita Blake: Vampire Hunter series of horror/mystery/erotica novels by Laurell K. Hamilton. The book was released in July 2013.

"Some zombies are raised. Others must be put down. Just ask Anita Blake.

Before now, she would have considered them merely off-putting, never dangerous. Before now, she had never heard of any of them causing human beings to perish in agony. But that’s all changed.

Micah’s estranged father lies dying, rotting away inside from some strange ailment that has his doctors whispering about “zombie disease.”

Anita makes her living off of zombies—but these aren’t the kind she knows so well. These creatures hunt in daylight, and are as fast and strong as vampires. If they bite you, you become just like them. And round and round it goes…

Where will it stop?

It’s a typical day at work for Anita Blake, if your day job is raising the dead, and being a U. S. Marshal for the preternatural branch. One phone call changed everything. It was from the mother of one of her live-in boyfriends. Micah Callahan’s father was in the hospital and he was dying. Micah had been estranged from his family for years, but now, his mother wants Anita to bring the prodigal son home for a last good-bye.

Anita thinks it’s going to be a tearful trip down memory lane, until she learns that Sheriff Callahan was attacked on the job by a zombie. The bite is rotting him from the inside out, as if it’s turning him into a zombie while he’s still alive, but Anita knows zombies and they aren’t contagious. But something is killing Micah’s father, and he’s not the only victim. And there are the missing persons, far too many to explain away. While Micah deals with his family, Anita is pulled into a case so terrible she has to call for back up from friends and lovers that are no more human than the some of the monsters they’re hunting, and even that isn’t enough. Edward, Death himself, comes with badge and flamethrower to watch over his friend, Anita Blake, while she fights for her life and the lives of those she loves. 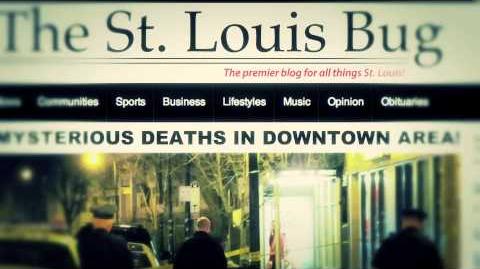 Anita receives a phone call of Micah's distressed mother, asking her to please come visit, because his father, Rush Callahan, is dying.

After making arrangements Micah decides he needs to take Nathaniel along, he will introduce him as their significant other. Of course guards are needed, which include Nicky, Dev, Domino, Bram, Ares & Lissandro.

Anita & Micah learn upon their arrival that Rush has been bitten by a rotting zombie.

After some family conflict with Micah's aunt, they go to his mother's house where they meet his siblings, which causes Micah's mother having to explain that she, Rush and Ty (Micah's stepfather) have a similar relationship as to Micah, Anita & Nathaniel's.

While Anita and all the law enforcement agents present go vampire/zombie hunting, Ares is bitten by one of the rotting zombies. While trying to transport everyone out with a chopper, Ares loses control and starts killing. Once on the ground Anita kills Ares, but a bullet that went through him, hit her, making her gain hyena.

Jean-Claude arrives in town and asks her to marry him after mentioning that if there was a way for all of them to get married, he would. As Micah had said this earlier to her and Nathaniel, she accepts. Still having to practicallities of such a ceremony this is later put on hold when plenty of her lovers are disappointed they would not be getting a ring.

Some of the methods of how Micah gets other animal groups to join to Coallition are mentioned: just talk, and softer methods of persuasion but also fights for dominance.

When Edward arrives he mentiones trying to set a date for his marriage and asks Anita to be his best man.

They learn that the source behind the rotting zombies is Morte D'Amour, who was presumed dead but took some of Marmee Noire's power into him, her necromancy.

Anita outmonsters him at a cemetary.

There is no specific time marker in Affliction, but it takes six months or more later in the same year as Kiss the Dead (May), which would place it November or December.